The Congregation of the Franciscan Sisters, Daughters of the Sacred Hearts of Jesus and Mary, was founded by Mother M. Clara Pfänder in 1860 in Olpe, Germany.  In 1863 the Motherhouse was transferred to Salzkotten, Germany, where it remains today.

In 1871/1872 Chancellor Bismarck incited the Kulturkampf through various laws, so as to prevent the Catholic Church from having influence on the politics of the land.  Through these Laws, which were directed especially against religious education and all religious institutes, the activities of the Sisters were curtailed.  Decisive in particular were the so-called “Falk Laws” of May 1872.

(Abstract from these Laws: “All religious orders and similar groups are to be excluded from the territories of the Prussian State.  New foundations may not be made; those already existing are to be disbanded within 6 months…..”)

Many religious orders of Sisters and Brothers had to go into exile.  This had indirectly a fortunate and providential consequence, that the Good News could be spread further in the world.

Mother M. Clara Pfänder, the Foundress of the Congregation of the Franciscan Sisters from Salzkotten/Paderborn, Germany, was also compelled to send her Sisters into other countries, and was at the same time able to give a response to requests she had received.  In December 1872 some Sisters had already emigrated to Carondelet/St Louis in the United States.

On Saturday, December 4, 1875, the “Deutschland” left Bremerhaven, and among the passengers were 5 Sisters, Franciscan Sisters from Salzkotten:

Who were ready to make a new beginning in a foreign country—the United States.

The good weather that was present at the beginning of the journey did not last.  Conditions changed and a terrible blinding snow storm arose, causing the ship to lose its course.  The following day, on December 5, the ship got stuck in a sandbank on the Kentish Knock, about 30 kilometers from Harwich, England.

THE COURSE OF THE STEAM SHIP „DEUTSCHLAND“

More than 28 hours passed before help came.  The ship with its passengers was mercilessly exposed to the raging storm and the rising water.  From a distance the passengers could see ships passing, which were not able to come and to rescue them.

Finally the steam tug “Liverpool” arrived from Harwich and was able to rescue 69 passengers and 86 members of the crew.  Sixty people lost their lives, and among them were our 5 Sisters.  It was comforting to know that the Sisters in the midst of their deadly peril prayed with their fellow passengers and gave priority to them in the rescue attempts, whereby they themselves found death in the floodwaters.

“….When at length a means of escape was at hand, they refused and allowed others to take their places and to save themselves….  Their example strengthened the courage of others and expectedly awaited with them the wet death.”

The Sisters were buried in St Patrick Cemetery, in Leytonstone, England, and their grave site is a constant and visible reminder of the love that they offered unconditionally.  While it was not allowed them a successful outer effectiveness to unfold in America for the Congregation, so had God blessed the offering of their rich lives.  The Sisters were the seeds that bore the hundredfold fruit.  In the American Province of St Clara their honor is especially alive. 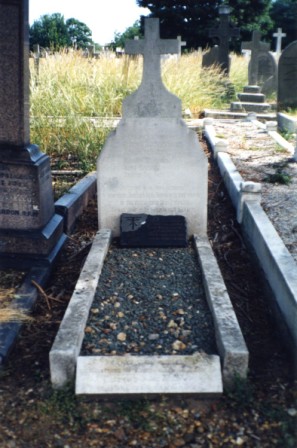 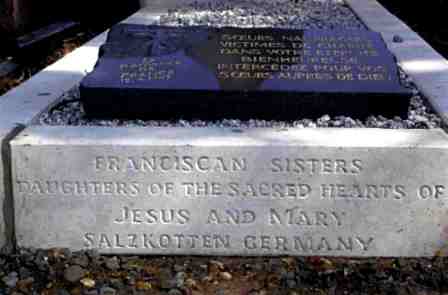 Gerard Manley Hopkins, SJ „The Wreck of the Deutschland“       (more: Excerpts from the poem)

the Shipwreck of the “Deutschland” in the year 1875