Blessed is the man who has joy
in the counsel of the Lord."
cf. Ps 1:2 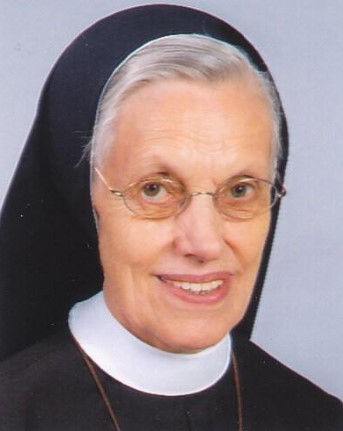 who was called to eternal life.

On the Obituary of Sister M. Paula Lüers

"Blessed is the man whose delight is in the commandment of the Lord." Cf. Ps 1:2

Sister M. Paula loved and lived her vocation with all her heart. This psalm verse, chosen for her by her two sisters, Petra and Klara, expresses this. With her whole being she joyfully followed these inner directives of the Lord and gave herself to serving the sick and needy. "Of Perpetual Help", her title, which she received when she entered the novitiate, who does not think of her decades of tireless service in the hospital in nursing and pastoral care. Always ready for action and help, that is how we remember her. Sister Paula was a prudent, lovingly caring fellow sister also in the community; the decoration had to be fine in the church and in the convent and suitable for all festivals and seasons. No effort was too much for her. That was her nature, probably already in the family, as I could gather from the conversation with her sisters Petra and Klara. Sister M. Paula was present and she was ready to help anyone who needed her, in joy and in sorrow, near and far. That was her mission. During the long years of her illness, she also lived her passion in silence for the mission, especially for our mission in Madisi/Malawi.

In one of the prayers for the deceased during these days, we heard very aptly for Sister M. Paula the words from the Gospel of John 14:1-2a: "Let not your heart be troubled. Believe in God and believe in me! In my Father's house there are many dwellings." Sister M. Paula firmly believed in this dwelling prepared for her and in life in fullness with God and all her loved ones, even though she was afraid of this final transition. Her faith lived from this certainty. She has now entered this dwelling that Jesus prepared for her after a fulfilled life. Sister M. Paula has left footprints, footprints of the love she received and at the same time generously shared.

Sister M. Paula, Auguste Josefa, was born with her twin sister, Sister M. Petra, on January 16, 1937, in Visbek, Vechta County, to Georg Lüers and Maria Auguste, née Bahlmann. Both were born into a large family. They grew up with three older siblings and two younger ones. In addition, their grandparents and an aunt lived in the house with them. The firm bonds in the family had a strong influence on all of them.

After eight years of elementary school, Sister Paula attended the agricultural college in Visbek for two years in 1952 and worked for her parents in the home and in agriculture. In the spring of 1954 she passed the rural housework examination. She then attended the sewing school of our sisters in Visbek during the winter months.

Faith was firmly anchored in the family and everyday life was shaped by faith. Despite all the demands of work, it was important to the parents that one of the family went to Mass every day in the parish church to bring God's blessing, as the mother said, into the family.

At an early age, Sister Paula's desire for religious life matured, but she did not share it with anyone, not even her twin sister. When it finally became clear that she was carrying the same decision within herself, the surprise was great. Only one year later, on August 6, 1957, they entered together into our religious community.

After her first year of novitiate, she learned nursing with her sister M. Petra in the Elisabeth Hospital in Iserlohn, which she completed after two years with a national nursing certificate. In 1962 she transferred to the Marienkrankenhaus in Schwerte and in 1968 to the newly built St. Josefs-Krankenhaus in Salzkotten, where she worked very beneficially for 50 years and strongly influenced the atmosphere and reputation of the hospital.

Sister M. Paula participated in many professional training courses, both technical and spiritual.

For more than 30 years she was in charge of the gynecology and obstetrics unit of the house.

In January 1998, after a serious illness and further professional training, she took over the work of the hospital chaplaincy. With great love and presence she was with the sick and dying. In the meantime, the pastoral care offered by the hospital would be unimaginable without the blessing of children, which she introduced, as well as the extensive mourning work and grief counseling for parents who have lost their child. In reverence for the life of every child and the deep grief of the mothers and fathers, she introduced a dignified farewell to the prematurely born or stillborn children and provided for a memorial, a concrete place of mourning at the cemetery here in Salzkotten.

After 50 years of service at St. Joseph's Hospital, her strength was consumed due to a severe kidney disease. Many years before, she had already had to go regularly to dialysis and still remained faithful to her work, to her service, in a deep spirit of commitment. In September 2018, she said goodbye to this, her beloved mission in life. She returned to the motherhouse. Since then, her strength steadily diminished, but not her will to fight. She used what strength she had at her disposal, above all she remained faithful to the mission, both inwardly and outwardly, and still organized many a bazaar.

We thank God for the gift of her vocation, thank Sister M. Paula for her life and work over 65 years in our community, for her service to the people entrusted to her, which she lived with great love and dedication.

Let us ask God in this Eucharistic celebration to accept her gift of life and to open to her the fullness of life and joy.