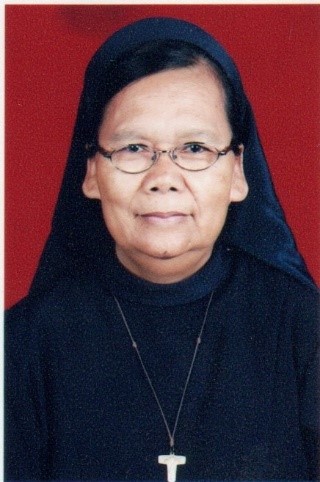 Friday, January 13, 2023 at 13:15 WIT she was suffered from stroke and was immediately taken to the Radabata Health Centre. At exactly 14:00 WIT was referred to Bajawa General Hospital.

Sunday, January 15, 2023, the body was brought from Were to Labuan Bajo Airport to Medan (Sr. Marta Simamora was departed with prayers and accompanied by the Parish Priest of the Holy Family Nazareth Were, Fr. Fransiskus Helmon OFMCap Custodia Sibolga, together with the FCJM community members Sr. M. Plasidia Sinaga, and Sr. Andrea Pardosi. Around 24.00 mid night they arrived in Monteluco and welcomed with prayer.

Monday, January 16, 2023, will be a prayer service and Requiem Mass at Motherhouse, Pematang Siantar

Tuesday, January 17, 2023, Mass followed by the funeral at the FCJM Sisters Cemetery in Sinaksak.

Sr. M. Marta Simamora was born in a Protestant Christian family. As the second of eight siblings, Sr. Marta chose to become a member of the Catholic church and enter religious life.

Sr. Martha was a gentle person, simple, friendly, wise and trusting in God’s will. She was able to embrace others in the fraternity and everyone she served. She was devout in her religious life, and leaving good example.

Her maternal spirit is very strong, really caring for and embracing all her sisters. She educated the young people to be skilful and independent. The main ministry of her was sewing. She empowers many of young girls and teachers in different communities mainly in Nias Island.

Sr. M. Marta Simamora FCJM, you have given your whole life to God and your faith in God has led you to true fidelity.

You are a true FCJM. May the word of God that you have lived lead you to eternal life in heaven.

Rest In Peace Dear Sr. Marta, We love you