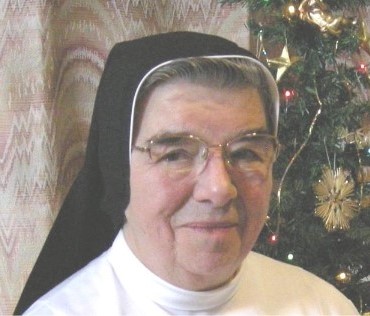 With the Virgin Mary, St. Francis and all the saints, with Mother Clara and all the Sisters who have already gone before us into the infinite joy of the living God, we inform you that God has called our dear fellow Sister home to Eternal Life:

ON THE OCCASION OF THE PASSING AWAY OF SR. M. EGIDE BILDSTEIN

Sister M. Egide was born in COUME on August 18, 1933.
She entered our Congregation on October 15, 1952.
Sr. Egide was an extremely benevolent fellow Sister, especially devoted to the elderly and sick Sisters, for whom she always took good care. For many years, she took charge of the "Office of Employment", which at that time took care of the placement of young girls who were looking for work in families in Metz.¹

Sister Egide was unbeatable when it came to Mother Clara Pfänder's life in Metz, and she served as a guide and translator when Sisters from other provinces visited us. She spoke English and German as well as French. She was a "hyperactive" sister. She continued this activity in her work for nature, taking care of the park in her free time.

When her illness became too severe to continue living at the Motherhouse, Sister Egide found a new home at the nursing home in JOUY aux Arches, which belongs to the Sisters of Divine Providence of St. Andrew.

1 Sr. Egide has practically continued the original task under the patronage of St. Blandina, started in 1871, until 1998, namely to help and also accompany young girls looking for work. In the beginning, it was mainly about German girls who were looking for work in Metz.