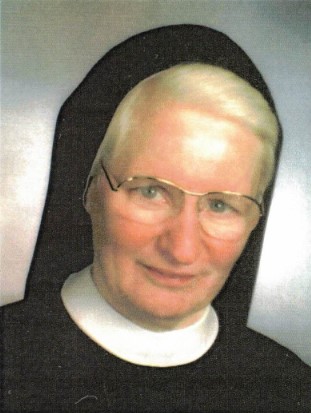 Grateful for all her love and care
we bid farewell to our fellow sister
Sister M. Christophora Vossen
from the Perpetual Help

née Franziska Vossen who was called home to eternal life.

On the passing away of Sister M. Christophora Vossen

Suddenly and unexpectedly, Sister Christophora was called home to eternity on April 24, 2022. The letter of death is preceded by a text from the Revelation of John, taken from the reading of Easter Sunday, the day of her passing. In the 1st sentence it says: "He laid his right hand on me..."
God not only laid his hand on her, but took her by his hand and led her  into his glory. It is so consoling that Sister M. Christophora has been spared a path of suffering, she has been led from her full life into eternal life.

Some life events should tell who Sister M. Christophora was. She was born on November 2, 1938 as Franziska Vossen in Esch, district Daun, in the Eifel and grew up with 8 brothers and sisters in a working class family, her father was a painter and carpenter. Her parents died at an early age, her mother at 49 and her father at 54.

Sister Christophora attended the elementary school in Esch for 8 years, from which she was graduated with good results. In the following years she helped in the parental household, attended the so-called winter school in which she learned sewing and needlework, and worked for a year in a clothing factory. Then she received an offer to work in the X-ray department of the district hospital in Mechernich. There she got to know us, the Franciscan Sisters of Salzkotten, and quite soon felt the call to religious life. When this decision matured in her, she asked for acceptance in 1958 and entered our congregation on March 4, 1959. She went through the postulancy, the novitiate and made her temporary profession in November 1961 and her final vows on November 19, 1966. During these years she learned nursing at St. Joseph's Hospital in Salzkotten. She had her first assignments in Twistringen and for many years in Schwerte. From 1977 to 1978 she learned outpatient nursing in Koblenz and received her assignment in Düren-Birkesdorf until 2010, after which she said yes to a new assignment in Marialinden/Overath. Here she worked 9 years in pastoral care.

During all these years, Sister M. Christophora participated in many ongoing trainings in order to always stay up to date, both in nursing and in caring for the elderly and the sick. Along the way, she attended courses for pastoral accompaniment in the Parish.

A certificate from the Caritas Association of Boppart/Rhine entitles her to train those interested in home nursing and to set up social clinics. On behalf of Caritas, she traveled to various countries in Eastern Europe during these years with the mission to establish and set up social centers, among others also in Romania. Through contacts with our sisters in Caransebes, in the former German Banat, and with the Caritas there, she was able to set up social services there as well. Throughout the years, she saw her commitment in helping weak, poor and needy people. It is also worth mentioning her tireless work for humanitarian transports that were sent to these poor countries.

Enough of the tasks of Sister M. Christophora, but who was she personally.
In addition to these many tasks, Sister Christophora became very sick and had to put many tasks on hold. Her attitude to life was thoroughly Franciscan. She put her title "of perpetual help" into practice.  With her dedication and willingness to help, as well as with her humorous nature, she inspired and accompanied many people. She was very outgoing, always taking care of people who needed her help.

In 2019, Sister Christophora returned to the Motherhouse. She would have gladly taken on a small task, but due to various illnesses it was no longer possible for her. As far as her strength permitted, she always visited the sick and elderly Sisters in St. Clare and maintained contacts with the individual Sisters in the Motherhouse. She often visited our "Perpetual Adoration" and certainly recommended all of us to the Lord.
Now we have one more intercessor in heaven.

We thank God for Sister Christophora for her witness of life, for her sisterly being with us, for her Franciscan witness both in the community and externally.
Let us now ask God in the Eucharistic celebration to grant her eternal joy for all the good she has done in and for the community.