The Lord is My Shepherd (Psalm 23) 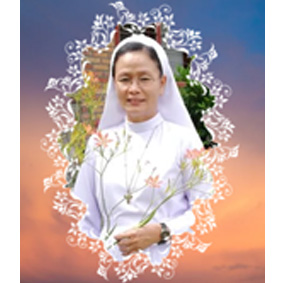 Her baptism name is Agnes Atiria Hia, born in Hilibadalu (Nias), on March 9, 1966, the 7th of 7 children, the daughter of Mr. Nurusali Hia and Mrs. Rosalina Gulo. Coming from the Sirombu Nias parish, Sibolga Diocese.

Personality Sr. Agnes Atiria Hia, she is a prayerful person, humble, cheerful, close to young people and loves to motivate young people. Her love for the congregation is shown by being faithful and obedient to her daily ministry and supporting the Junior Sisters.

A few years ago she had a medical examination and had to undergo serious treatment., In February 2020 it was recommended that she should take the medicine until the time determined by the medical doctor.

In April 2020 Sr. Agnes underwent a surgery at the Hospital Murni Teguh, Medan and and afterwards she got a treatment at Community Jl. Sei Padang - Medan

In June 2020 she received Radiotherapy (ray)  at the Hospital Murni Teguh - Medan.

On August 21, 2021, after several months of treatment in Medan, Sr. Agnes Hia arrived back to St. Clara Community - Pematangsiantar . where she received intensive care.

On Thursday, February 24, 2022, she received the Sacrament of Anointing from Father. Aditia O. Carm in the Chapel of the Sacred Heart- Pematangsiantar.