The Wheaton Franciscan Sisters invite your prayers for 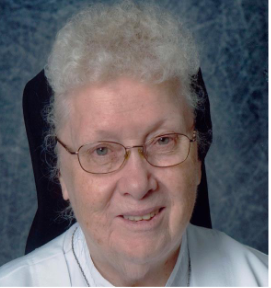 Sister Jane Ann Kiefer, a member of the Franciscan Sisters of Wheaton and a former resident of Cape Girardeau, MO, passed away on March 8, 2022, at St. Patrick’s Residence in Naperville, IL.

Born in Oran, MO on January 21, 1928, the daughter of Theodore M. (Ted) and Bernadine (Dena) Eftink Kiefer, she was one of eight children. She attended Guardian Angel Catholic Church and Grade School in Oran and graduated from Oran Public High School. Sr. Jane worked in the clerical department at Western Electric, supplier of Bell Telephone, in St. Louis, MO until age 20. She entered the Franciscan Sisters in Wheaton, IL, in November of 1948, professing her final vows in May 1954. She attended Marquette University in Milwaukee, WI, where she received a bachelor’s degree in Business Administration in 1957 and began work in administration for the Franciscan Sisters’ Hospitals. She later attended St. Louis University where she earned a master’s degree in Social Work in 1972.

In September 1976, Sr. Jane was assigned to St. Francis Medical Center in Cape Girardeau, MO where she started the medical social work department. In 1985 she transferred to pastoral care where she remained until her retirement in 1998. She continued serving the medical center as a volunteer until November 2015. She moved to the Wheaton Franciscan Motherhouse in Wheaton, IL, in 2019.
Survivors include one sister, Sr. Helen Kiefer of the Adorers of the Blood of Christ, many nieces, nephews, grandnieces, and grandnephews. Sr. Jane was preceded in death by her parents, her sisters Adela Trost, Ethel Massmann, Rita Hinkebien, and an infant sister Mary Emma, and two brothers Theodore A. and Paul J. Kiefer.

Our Lady of the Angels Chapel

Our Lady of the Angels Chapel

Following the Mass of Christian Burial