"Christ is born among us;
Come, let us adore him."
Invitatory of Christmas
Grateful for all her Love and Care
we say good bye  to our Sister 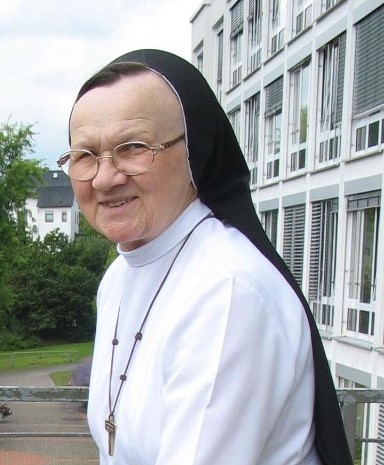 who was called home to eternal life.

" When morning arose, Jesus was standing at the shore." Joh 21,4a

Yes, in the early morning of December 30, Jesus was standing there and received Sr. M. Giselind in love, redeemed her from her brief and violent suffering. For herself and for all of us, this final farewell came too quickly. Quietly and inconspicuously, as it was her nature, she lived and worked, probably from her early youth, so she passed away. S. M. Giselind did not like to be in the center of attention. When she had to hear the truth about her situation not even a week ago, before she died, she said to me, but not that you will make big words about me. To the doctor who gently opened this reality to her, she calmly said that she was ready to accept her death. That was S. M. Giselind.

S. M. Giselind was born on September 20, 1941 in Winterfeld, Upper Silesia, the daughter of Marie and August Walczok. She grew up with two younger brothers and attended elementary school from 1948 - 1955. For one year she worked in her parents' house, then she attended a tailoring course for 6 months. From 1957 to 1958 she worked in a sawmill. Since her parents, being of German origin, had decided to move to Germany, she came to the Federal Republic with the family in August 1958. From the Friedland camp she went to the Emden camp. Here, after three months, on the initiative of Caritas, she was sent for nine months to a special school in Königswinter, which was run by religious sisters. S. M. Giselind spoke with pleasure of this time, during which she studied with other young women, went on excursions and other activities. She was in contact with one of the religious sisters until a few years ago. However, since the family was dependent on any financial support, she unfortunately had to end this school early and took up a job in a factory. After this period of transitional camps, the family was assigned a small apartment in Letmathe. From this time on, Rosemarie worked in the kitchen of the Letmathe Hospital. Here she got to know our sisters and here her desire to join our congregation finally bloomed. The hospital's testimony succinctly states what could be said about her entire life: "Miss Rosemarie is a deeply religious person, extremely conscientious, hardworking and modest."

During the time of her religious formation, she took on two years of service in the refectory of the sisters' community in the Marienkrankenhaus Lippspringe, followed by three years in Castrop Rauxel, and three years in the motherhouse, where she took part in a course in Maria Laach, among other things, and learned how to design floral decorations in the chapel and house.

In early December 1974, S. M. Giselind received her assignment at the Maria-Hilf Home for the Elderly in Marialinden, where she was at home for 46 years. For many years her main task was to care for about 50 residents in the dining room. She fulfilled this service with much love and personal commitment, and cared just as well for the clergy of the home and all the guests. She loved to decorate the flowers in the chapel and the house, but also the park. She created beautiful flowerbeds to delight the residents and staff, and she also took care of the sisters' graves in Marialinden. When after years the number of residents who could come to the dining room for meals decreased, S. M. Giselind additionally helped in the laundry. With the start of the major reconstruction of the house in 1999, the dining room was closed. The complete reconstruction of the house during the running of the house required an enormous effort. Especially the daily cleaning work at late hours, after the workmen had finished their work, was exhausting. During this difficult rebuilding phase, special group offers for residents were created. Besides dirt and construction noise, a change was needed. The cozy round was introduced and was immediately very popular and remains so to this day. From 2005, S. Giselind took over the refectory service for the sisters and the care for the remaining house laundry, after an overall decision was made to use an external laundry company. For many years, S. M. Giselind was assistant to the house superior. She loved being in community, loved parties and celebrations, especially carnivals. In 2013, S. M. Giselind became seriously ill and had to take a year off. When she returned to Marialinden in 2014, she resumed the care of the house laundry. What was in her power, she did well and with all her heart.

Her leaving on 12.11.2020, together with S. M. Robertis, was very sudden due to the outbreak of the Corona infection in the house. Her official farewell after about 46 years of service in Marialinden was later integrated into the farewell of the Sisters from Marialinden on June 9, 2021. She gratefully accepted this event and was very happy to see her old work area and the co-workers again after such a long time.

It remains for us to thank S. M. Giselind from the bottom of our hearts. Her life and work, her service in our community and for the people entrusted to her from morning to night was always done with love and diligence. Quietly, modestly and prudently she worked in the background.

" When morning arose, Jesus was at the shore…“