"Send your light and your wisdom,
that they may guide me;
let them lead me to your
holy mountain, and to thy dwelling place."
Psalm 43:3
Grateful for all her love and care
we bid farewell to our
Fellow Sister 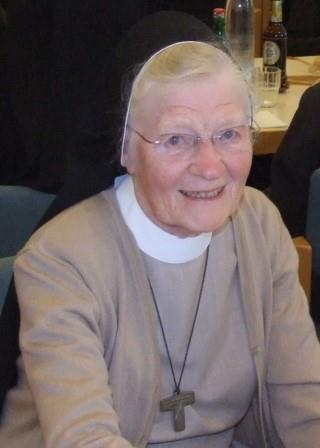 Commemoration for the passing away of Sister M. Edburg Petzold

Yes, now HE has led Sister M. Edburg to eternal dwelling after a long and fulfilled life.

Ludowika Petzold was born in Paderborn on January 31, 1923, as the third of the five children of the postal clerk Friedrich Wilhelm Petzold and his second wife Josephine.

The father had seven children with his first wife, who had died in 1919. In the same year, he married Ludowika's mother, who was 20 years younger than he was. In 1929, around the time Ludowika entered school, her father died, only 60 years old. Her mother Josephine remained a widow until her death in 1968.

Ludowika first attended the elementary school in Paderborn for five years, then the elementary school in Bad Lippspringe for another three years. She was a lively and vibrant girl and already had a big heart for children at that time. It was evident from the fact that she always had an open ear for her two younger sisters - and remained so until their deaths.

After finishing her school years, she worked as a nanny and in the household of various families for a few years before and during the Second World War. This seems to have given her a lot of pleasure, as all testimonies consistently show. She acquired further knowledge in a housekeeping school in Höxter. Subsequently, from 1940 to 1942, she completed training as a child care and household assistant in our Marienheim. Before joining us, Ludowika worked for several more years in infant care in Hörste and also as a housekeeper in the partial hospital in the Auguste-Viktoria- u. Cecilienstift in Bad Lippspringe. And all places confirm her very good work, diligence and conscientiousness.

She came into contact with our sisters at an early age. Gradually the desire to enter our community will have matured in her.

After her entrance, she was first employed in pediatric care in Birkesdorf, then in the kindergartens of Reil and Castrop, and in the pediatric wards in the hospitals of Castrop and Mechernich. In the meantime, in 1956, she had completed her nursing training with very good results. Later, in 1982, she took part in further training to become a home manager in facilities for the elderly. Equipped with good training, she was able to work in many different ways over the years. Thus she continued to work in nursing care for the elderly in Langenberg and in nursing care in Bigge. After the community in the Josefsheim in Bigge was dissolved, she took over the service at the gate in our retirement home in Beringhausen at the beginning of 1995. After Sister M. Theolina moved to St. Clara in 2001, she also took care of the refectory. In 2008 Sister M. Edburg moved to the motherhouse herself. For some time she gladly provided the gate service in the Clara Pfänder House on an hourly basis. It was not until Nov. 17, 2020, that she moved to St. Clara, as she increasingly needed care. However, with her walker she was quite mobile and could be found regularly in the Motherhouse until the end. Celebrating Holy Mass with all of us in the Motherhouse Church was very important to her. For this she really mobilized all her strength, even if in pain.

The liveliness and dynamism that was already evident in her childhood days continued throughout her long life. Wherever Sister M. Edburg went, she quickly came into contact with people and cultivated these relationships. As a result, we were able to record many a donation for our mission from her circle of acquaintances.

Yes, she loved life and knew how to enjoy it with a certain independence. At the same time she was always there for others, especially for children. And last but not least her family.

Whenever Sister M. Edburg was needed, she was there for her relatives. She especially took care of her brother-in-law and lovingly accompanied him on his last journey. She herself was already over 90 years old. After his death, she spoke well to her sister in almost daily telephone calls and cheered her up.The family appreciated and loved the great-aunt very much and was very happy about every visit from her.

In 2020, Sister M. Edburg was able to celebrate her 75th religious jubilee, although the celebration was made up for this year with a garden party. And she was there. I was told by a relative that she was asked by her guests what she could say in retrospect about her life as a nun. She answered that it was a beautiful life and that she would not do it differently. That is really nice to hear. I fondly remember her alert and mischievous eyes that revealed just that.

Certainly, it was not easy at the end. Sister M. Edburg clearly felt her diminishing strength and suffered from it. Especially when she was clearly aware of it. We all bore this with her, and at this point I would like to quote a relative who expressed thoughts attributed to Franz Kafka:

"One sees the sun slowly setting and yet is startled when it suddenly becomes dark."

Surely she now sees his light and recognizes his truth, for she has allowed herself to be led to his dwelling place, where she lives with HIM in peace.