Christ is risen;
come we adore him!
Hallelujah
Invitatory of Easter

Grateful for all her love and care, we are saying farewell to our sister 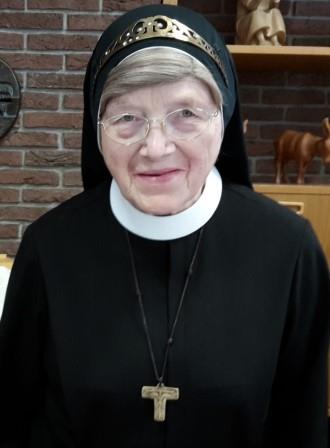 "Christ is risen;
Come we adore him! Hallelujah."

On Easter Sunday, at noon, the Risen Lord called Sister M. Cornelis to be with Him. A very special moment!

Sister M. Cornelis, Regina Freise was born on April 6, 1932 in Mantinghausen as the daughter of the farmer and railroad worker Stefan Freise and his wife Maria and grew up with four brothers and three sisters. One brother died as an early child.

Regina attended elementary school in Mantinghausen for eight years, from which she was released in 1946. At first she helped her mother in the household for two years. Then she had her first contact with us Franciscan Sisters in the Marienstift in Westenholz, in the sewing school, which she attended for two years. Afterwards she learned there the housekeeping. From 1951 Regina Freise worked for 1 ½ years in a manor household in Nordhagen, later in a household in Westerwiehe.

In all her references, she is described as an extremely capable, hard-working and conscientious young woman. During these years, the desire to enter a religious community grew in her, as she herself wrote.

On August 5, 1954, she entered our Congregation. She received her habit on May 19, 1955, and was given the name Sister M. Cornelis with the title: of the Sacred Heart of Mary.

When her mother fell ill, Sister M. Cornelis was allowed to go home for several months in 1967/1968 to nurse and care for her. This was a great gift - for herself and her whole family. In this way she was able to be a great support to all of them, which also corresponded to her deepest nature. She was happy to help wherever there was a need. Sister M. Cornelis took part in many advanced training courses, whether in nursing or in the social welfare, and gladly expanded her professional knowledge.

In 1992 she changed from nursing to geriatric care in Marialinden. In October 1993, she began her service at St. Clara in the Motherhouse. That she had a special feeling for flowers could be seen from a distance. Looking at the flowers on the windowsills was always a pleasure. Sister M. Cornelis liked to tell about this special care when people expressed their appreciation.

But she was not only warmly devoted to the plants. She had no lack of ideas to bring joy to the sisters in St. Clara. In particular, her cherished baked apples were distributed with joy by her, even to the sisters who only passed by there - so I have been told.

And further that her special care was for the so-called "poor people", e.g. in the Marien Hospital in Bad Lippspringe, who really had nothing. Sister M. Cornelis took special care of them.

On 04.11.2011 she herself moved to the St. Clara community, where she had been active for so many years. She initially continued the flower care she loved and gladly took on other small tasks. Her increasing dementia troubled her and she suffered very much. Because of this illness, it became necessary for her to live in the Antoniushaus in Paderborn for a few months, from October to the end of January this year. Surprisingly, she felt very comfortable there. She experienced loving attention from all the staff, which helped to make her stay easier. We were delighted when we were able to take her back home at the end of January.

Her strength diminished more and more until she gave her life back to her Creator on Easter Sunday. She celebrated her own personal Easter this year and can affirm:

"Christ is risen;
Come we adore him! Hallelujah!"