"Praised and glorified be at all times
the Sacred Heart of Jesus in all eternity."
Excerpt GL 771 T: Aloys Schlör 1852

Grateful for all the love and care we received, we are saying goodbye to our Sister 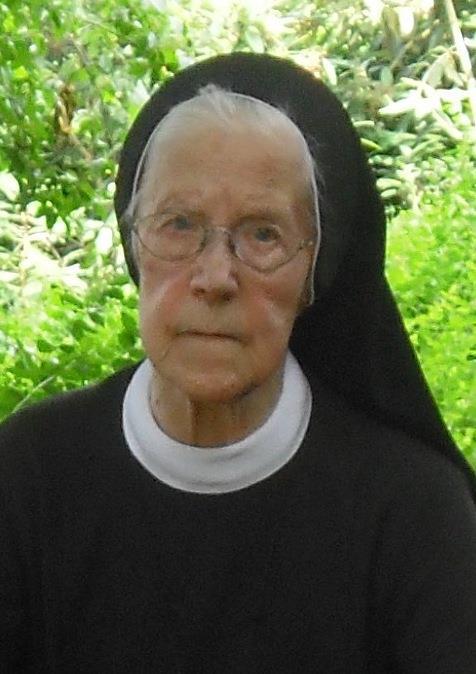 "Praised, and blessed be at all times
the Sacred Heart of Jesus through all eternity."

For sure, Sister M. Adelgund would have liked to join in when we sang the song just now. At her investiture, she received the title: of the Sacred Heart of Jesus. We all cherish the devotion to the Sacred Heart, and she will have done so in a special way.

Sister M. Adelgund was born on November 19, 1928 in Letmathe as the daughter of the factory supervisor Friedrich Röllecke and his wife Therese. She grew up with four other siblings. Already as a young girl, she had to experience painful losses. Her mother died suddenly at the age of 34 and she also lost one of her siblings at an early age. It seems that Sister M. Adelgund was always interested in household and kitchen. Thus, immediately after leaving school in 1943, she was employed in a household for four years. From 1947 to 1950, she helped in her own family household. After that, she worked for a year at the Marienhospital in Schwerte learning the kitchen skills. Here the real foundation was laid for her further work in many places, later in our congregation. Her joy, her eagerness to learn and her great interest in all kitchen duties were confirmed by the Marienhospital in her certificate. And so she continued her career from February 1952 as a cook in the St. Rochus Hospital in Castrop-Rauxel.

Sister M. Adelgund herself wrote before she entered the congregation that she had been desiring to enter a religious community for several years. In her just mentioned places of activity and also in her home town, she came into contact with our sisters, and so the desire to enter our congregation will have grown in her soul more and more. Anna Elisabeth Röllecke, or Anneliese as she was called, took this step on August 5, 1954. Entering the novitiate on May 19, 1955, she received the name Sister M. Adelgund and the title: of the Sacred Heart of Jesus.

She professed her temporary vows on November 19, 1957, and her perpetual vows on November 19, 1960, and each time she was also able to celebrate her birthday on those days, November 19. Sister M. Adelgund was active in many private and institutional kitchens, where she served with heart and soul. I would like to list them briefly: Motherhouse Salzkotten, Barbara Hospital Lütgendortmund, Trade School Arnoldsweiler, Auguste-Viktoria-Stift Bad Lippspringe, District Hospital Mechernich, Johannes Hospital Hagen-Boele, Liborius House Paderborn, Josefs Hospital Salzkotten. In 1972 Sister M. Adelgund was trained as a "state-certified housekeeper".

From 1973 on, the Motherhouse kitchen was "her realm". Together with Sister M. Dietlinde and Sister M. Agnate, she took care of the physical well-being of all sisters and guests. Extra wishes were also gladly fulfilled.

Their common concern was especially for the assistants in the kitchen, who had found their home in our house, and whom they lovingly cared for. Even today, the long-time employees of our kitchen like to talk about the old days and remember many more anecdotes. The heartfelt relationship with the staff naturally extended beyond the kitchen area. I think we can speak here of pastoral care, which can have its place quite modestly and silently wherever humans meet humans. For many years, Sister M. Adelgund worked here in the Motherhouse. As she and Sister M. Agnate became older and their strength for the heavy physical work diminished in 2005, Mr. Nilges relieved them and they went into well-deserved retirement. Small tasks were naturally taken over by Sister M. Adelgund, and she continued to help gladly in the kitchen area, which was so familiar to her.

Sister M. Adelgund was a lovely person, more silent and withdrawn. But wherever she was, she was very present. This was also the case recently in St. Clara, during her suffering from dementia. She lived in the way she could relate to everyone she met and with whom she shared the living space. It was a gift to observe and experience. Let us thank her for her work and her presence. This is how we remember her with pleasure.

On the night of February 11, 2021, Sr. M. Adelgund surrendered her life back into the hands of her Creator.

Once again, let us join her in the words we sang together many times:

"Praised, and blessed be at all times
the Sacred Heart of Jesus through all eternity."