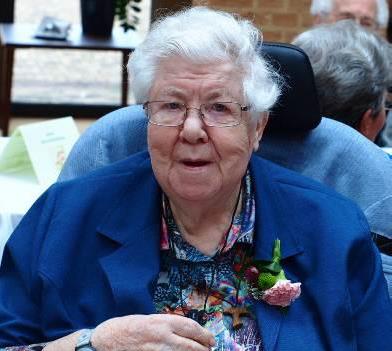 Being 100 years old was not given to her but last September she was one of the jubilarians: she could celebrate her 75th jubilee here. At first she wished to attend the sisters of Bennebroek where she was at school from the age of three until the age of sixteen. Then she came for a short period to the Maria Foundation. There was Sr. Wigberta who let her carry out all kinds of tasks. And sr. Nicoletta, who described herself as a doer, felt attracted by this approach. Her choice was made: she entered in klooster Alverna.

I don't think her choice to live as a religious was that surprising. Her parents, about whom she always spoke with great warmth, had shown her from an early age that having an eye for each other was as self-evident as breathing. In a playful way she learned that doing something for someone else was not exceptional but was part of everyday life. Often she told about her mother who sent her to people in the village to bring them an egg. Sent out to be close to others and to help them: in this one sentence her life is enclosed!

But with such an attitude it is not yet a given that you choose to live as a religious. But for sr. Nicoletta it did. She could talk about her vocation in very simple and direct words. Then she said: 'I always wanted to be his' and with him she meant Christ first of all. And the same resonated in her prayer in which she always said: 'I want to be yours'. That is clear and unambiguous language!

And so she went on her way. The text of Newman that we just read could just as well have been her prayer on her way: Work in me and through me; I was born to serve you, to belong to you and to be your instrument. I do not want to see, I do not want to know, I desire nothing but to be an instrument in your hand. And that Sr. Nicoletta wanted to be that is shown by the fact that for nothing she felt too great. After school, where she loved to be, she jumped where she needed to be. And that could vary from washing and shaving grandpa Green, helping a mother who had just had another child or pulling a calf. And that last story she often told with amazement and surprise in her voice, like 'how could I have done all that anyway'.

But she could also be worried. And she could feel abandoned. One of her almost winged sayings was 'I want to be part of it so badly'. And she said that because she often felt that she did not belong. And that was not because of you. In addition to her hearing problems which did not make it any easier, inside her there was a feeling of being less worthy than others. Sometimes a history is so deep that you can hardly reach it anymore. And at such moments she could long back to a time of togetherness, a time in the past, that was definitely over. But it was nice to see how she picked up the thread again and again by having something to hand and making something in the literal sense of the word. And how she could enjoy everything and everyone that walked outside her window. She saw all of them and waved at everyone. It often made her day cheerful again! Also here she showed how much the little one was dear to her and how much she had an eye for them!

In the last phase of her life she regularly wondered who she really was. I don't know who I am,' she said. It is not strange that she wondered this because nobody knows herself fully. But when she asked herself this question, it was fascinating to hear what story followed. Because Sr. Nicoletta expressed herself through stories! When she said: 'I don't know who I am', then there followed a story of an encounter with a little girl she saw when she was taken outside, here on the grounds. A little girl she didn't know and who just walked up to her and wrapped her arms around her. How is that possible', she then asked herself. Yes, it's possible that someone else does know you, maybe even better than you know yourself. In any case, the little girl recognized her as a good and warm person, which she expressed by spontaneously hugging her arms around Sr. Nicoletta. This made a deep impression on her. Just a piece of confirmation for who she was of a little girl she had never seen before.

And now she is at home, with God. With the one who knows and understands us so deeply. Once, when she was at peace with herself and with everything around her, Sister Nicoletta said: 'He, God, made me this way and so all will be all right'. That it may also be good for her now. That she may be safe forever in God's love and warmth.