"Come Lord, set me free,
deliver me by the
virtue of your goodness."
Psalm 6,5
In this confidence and strengthened by the sacrament of the sick, our beloved sister,
sister-in-law and aunt peacefully fell asleep in the love of Christ. 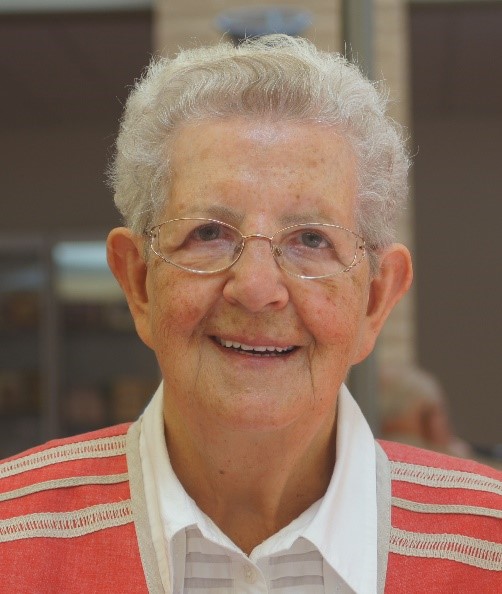 Allegonda Theresia van Loenen
Franciscane Sister from Aerdenhout
Born on October 29, 1934 in Schipluiden.
Deceased on August 5, 2020 in Aerdenhout.
She was a member of our Congregation for 66 years.

In stillness and grief, but also in deep gratitude, we are gathered this morning to bid farewell to Sister Theodosia, who gently passed away last Wednesday afternoon. We cordially welcome the sisters, co-workers, and relatives of Sr. Theodosia who are present here and through the video transmission. Many others will be with us at this hour in their thoughts and hearts, as they unfortunately could not come for reasons of corona precautions. It hurts to have to write 'no' to friends and colleagues.

Especially for Sister Theodosia it was important to belonging and not to be left out. Her life motto was: "I do not want to be an island in a ocean of people".

Today is the last time we have this remarkable woman in our midst. In the midst of the community that was very dear to her heart and which she joined in the St. Ursula Foundation at the age of 14. We will sing songs and listen to stories, most of which she taught herself. In this way we will remember her, thank her and entrust her to the Creator from whom all life emanates and to whom it all returns.

First of all we want to kindle a light around her and let it shine, because we believe that Sr. Theodosia now dwells in the light of God. Sr. Jeannette, Sr. Trees, Sr. Simone, Cousin Mariette, friend Els and Cousin Gerda, may I invite you to do this?

The story we have just heard is known as "Jacob's battle at the Jabbok". You all know the arch father Jacob, but perhaps not the Jabbok. The Jabbok is a river and every river is a border, a passage between old and new, here and there. You understand that this story is not about a pleasure trip, a ferry crossing on a hot summer day. The crossing with which Jacob wants to get from one side of the river to the other is a symbolic passage. He had something to come to terms with. He wanted to do many things in his life differently, but first he had to accept and do the old one. So he was fighting with an angel, with a messenger of God.

Sister Theodosia also had her struggles in her life. What did she desire?

Sr. Theodosia was a remarkable, courageous and open-minded person. She knew how to get involved and said YES to every request. With a strong commitment she was at the service of all people, especially those who were sick or orphaned in the hospitals in Haarlem and IJmuiden or in Indonesia, or who were preparing for their final crossing in the hospice. Gon, as Sr. Theodosia was often called, was there, she saw the need and knew how to bring joy to the world with her imaginative stories. In this way the Sisters remember many beautiful moments with her.

One of Sister Theodosia's challenges was the struggle with God. God was for her the Good Shepherd, her light and her rock. And yet this relationship of trust was often under threat, this male image of God, this savior of everything and everyone, while so much injustice remained. There was a time when she declared that this was why she had left God. Mary was allowed to stay. With Mary, she could put aside her worries and talk to her on an equal footing. Just like with the statue of St. Agnes in the garden, for which she often looked. And only a few weeks ago, during these difficult last months, when nothing was as it was kown, she said that God was not in her and she was not in God. We are talking about her wrestling.

The anointing of the sick three weeks ago became her jabbok. There finally ended her struggle. She longed for the blessing to draw a line under all the struggles she had fought in this life. To make peace with whatever life had thrown at her, to accept that she was Theodosia and was still called Gon - but later consciously returned to her monastic name Theodosia. The anointing of the sick was a true gift from heaven. So she was blessed. And then it gradually became calm around her, more and more peaceful. Sr. Theodosia was ready for the great crossing. She could leave everything behind and pass over in peace.

Rembrandt did a painting of Jacob's fight with the angel, the arms wrapped tightly around each other. It looks as if Jacob is falling, but at the same time he is lying in the arms of the angel. The angel captures him. Actually you can not determine whether it is a fight or a blessing. Rembrandt connects Jacob and the angel, the fight and the blessing. Is Rembrandt saying that we are blessed, just when we're wrestling? That God is near, especially when we are struggling? Even when we have no idea about it? That we are blessed in good and in hard times?

We all have our own battle to fight on the Jabbok. This is not a battle to win, but rather to live with ourselves. With our strengths and weaknesses. Sometimes a lifelong struggle, sometimes a short struggle to become fully the person we are called to be. The image and parable of the One who is the Love, who blesses each of us over and over again. Sister Theodosia, Gon, experienced this. She is now safely on the other side of the shore, united with God. Amen.